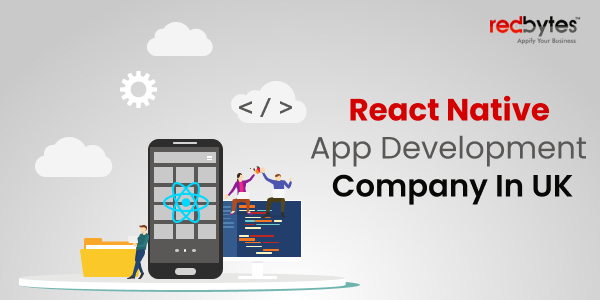 Don’t worry, we have got your back. We have provided a comprehensive and in-depth explanation of React Native and the best React Native app development company in UK.

What Is React Native?

React Native is a JavaScript library for creating natively rendered mobile applications for iOS and Android. It’s based on React, Facebook’s JavaScript library for developing user interfaces, although it’s geared toward mobile platforms rather than browsers. In other words, web developers can now develop mobile apps that seem completely “native,” all while utilising the well-known and popular JavaScript library. Due to its ability to share code across platforms, React Native makes it easy for developers to code for both Android and iOS simultaneously. React Native presently supports iOS and Android and also has the ability to support other platforms in the future.

Read Also: How Much Does it App Development Cost

React is an open-source JavaScript framework for creating efficient and robust user interfaces for web applications. It is heavily built on reusable components.

As previously stated, just like React Native some years later, React was also brought to life by Facebook in 2011 as a direct response to their scaling issues. It was a period when Facebook advertisements were skyrocketing, and regular modifications to their user interface slowed the platform tremendously. React fixed this issue, and after Instagram was purchased by Facebook in 2012, it was also utilised on the app’s timeline.

React Native, which is backed by React and built by Facebook, was a logical extension of React. It is a mobile framework that allows the development of near-native apps in JavaScript.

How does React Native work?

As previously said, React Native develops the app’s UI using JavaScript. React Native, unlike its counterparts, does not rely upon web views, but instead on the actual real materials offered by native platforms. It offers built-in access to native views and components, as well as the ability to use native-written code and grant the API access to OS-specific functionality within the app.

React Native employs the “bridge” approach, which enables asynchronous communication between JavaScript and Native components – the bridge concept has been at the core of React Native’s flexibility. Native and JavaScript components are unrelated technologies, although they can communicate with one another.

In addition to its advantages of utilising OS-native features, this architecture has substantial disadvantages, such as the constant use of bridges within the app, which may hinder its performance. If you plan to develop an application with lots of things, data, and more, then React Native is perhaps not the best option. 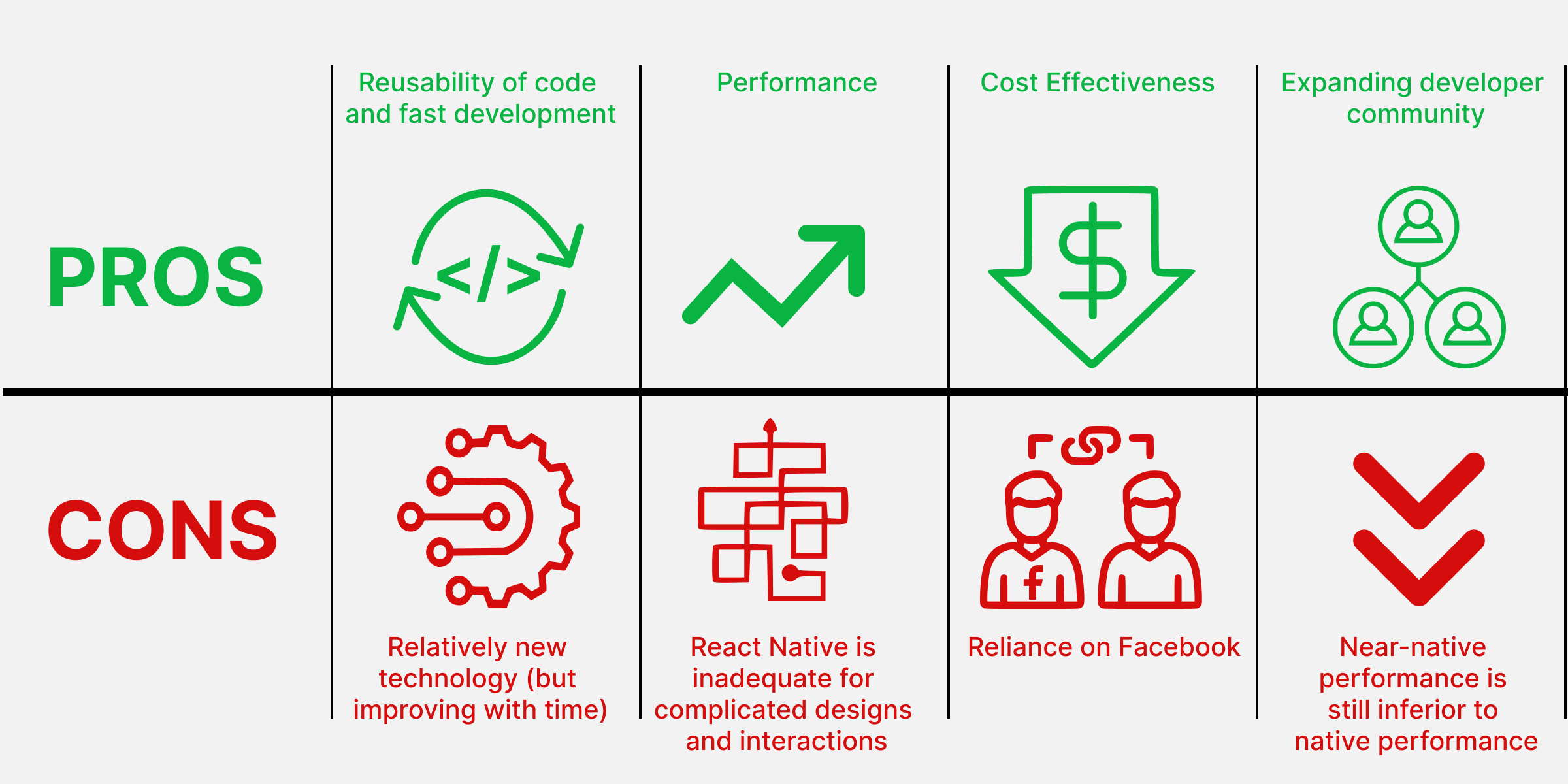 1. Reusability of code and fast development:

The most significant and powerful feature of React Native is the ability to create for many platforms at the same time. Other benefits of using the same code base for several platforms include faster app development and time-to-market, easier and less expensive maintenance (you just have to worry about one code base rather than numerous), and a better onboarding process for new developers joining the project.

React Native’s “hot reloading” functionality allows developers to see changes in the code in a live preview without having to refresh anything. This little change may greatly enhance the development process by providing real-time feedback on any changes made to the code.

React Native’s “bridge” concept is groundbreaking when compared to existing cross-platform development options. Because React Native apps use natively written code, they are less sluggish than web-based cross-platform solutions. The official statement is that React Native provides “native-like” performance. However, it is not always the case; simply put, it provides a “near-native” experience.

The core rationale for cross-platform development is cost efficiency. Because code is reused across platforms, a smaller team is generally required to complete the project. In contrast to native development, which requires two different teams to create two equivalent operational solutions instead of one.

React Native is an open source framework with a currently active and growing community. We must not overlook Facebook’s role, since they are always working on upgrades and expanding the framework. This implies that if you run into a problem that has yet to be solved in React Native, you may discover a swarm of individuals ready to assist you because they are interested in making the framework more complete and reliable.

Read Also: How Much Does It Cost To Hire An App Developer?

React Native is still in its early phases, and as previously said, it has several limitations, issues, and concerns that must be overcome. Because some custom modules do not exist in the framework, developers may need to spend extra time building and creating new ones from scratch. During the app estimate phase, your partner company or developers should inform you of this.

2. React Native is inadequate for complicated designs and interactions:

Whenever dealing with sophisticated UI design decisions, complex animations, and extensive interactions, React Native’s performance suffers. Again, this is due to the bridge concept: all native modules must connect with the JavaScript part of the app, because too many of these interactions may dramatically slow down the app, making it sluggish and just providing a horrible experience.

Using a third-party open-source technology has its own set of drawbacks. If Facebook decides to stop utilising the technology, other companies may fall into line. Nothing indicates this turn of events as of yet: Facebook uses React Native in their main Facebook app, the Ads Manager app, Facebook Analytics, and Instagram. The framework’s community is continually growing, and new large corporations are joining the fray.

While this is important to take into consideration, native technologies offer a much higher degree of support and backward compatibility in this regard.

We have highlighted how React Native’s speed is superior to alternative cross-platform solutions, but it is still slower than native app development. The influence of React Native on the performance of your app should be reviewed with your development team. For the vast majority of applications, it is a slight, practically unnoticeable blip that becomes more noticeable when dealing with massive amounts of data or “bridges.”

Which is the best React Native App Development Company in the UK?

Businesses are increasingly focusing on mobile app development. With a diverse variety of expertise and a record of working with organisations both locally and worldwide, the Redbytes team knows the importance of ‘collaborative development,’ and strives to meet client needs while developing an app concept that meets your budget.

We can proudly proclaim that Redbytes Software is one of the leading mobile app development companies in the UK, capable of providing Android, iOS, and other cross-platform development services. Our mobile apps can help you enhance productivity, operational efficiency, and client engagement by using dynamic designs and a user-friendly interface. We work with a professional and enthusiastic team to help you develop outstanding and accessible app products that are responsive across multiple platforms.

We at Redbytes Software love working with ambitious customers that have amazing ideas because it keeps us going and encourages us to challenge ourselves to produce some remarkable applications that inspire, engage, raise profits, change lives, and users talk about.

Read Also: How Much Does It Cost To Make An Ecommerce App?

Despite a few flaws and hitches, the React Native framework passes all tests and barriers to becoming the top choice for practically every React Native Development Company to create mobile apps. A React Native developer not only finds agility and convenience while producing React Native apps, but also great efficiency, low cost, and workload during the process.

What makes the process even more fascinating is that you don’t have to focus on both the iOS and Android platforms when developing the app. As a result, many of the world’s largest corporations count on the React Native framework to develop innovative apps that we use on a regular basis.

You should now have a better understanding of React Native and know that Redbytes Software is the best company in the UK to develop React Native apps.