When it comes to music, we always expect more and need a player that will take the listening experience to an entirely new level. Smartphone users in UK usually have pre-installed default music player apps such as easy-to-use Google Play Music or device-specific brand apps.

It is possible that default app does not contain all the powerful features such as customization, editing, sound control and file management.

Hence, to surprise yourself with a rich music experience, consider the list of 13 best music player apps for Android devices in UK.

Easy-to-use, sleek and stylish, Pulsar Music player is an elegant Android music app in UK. For this strong reasons and the fact that it delivers totally ad-free music listening experience, Pulsar tops the chart and becomes a favorable, decent and worthwhile app in its niche. 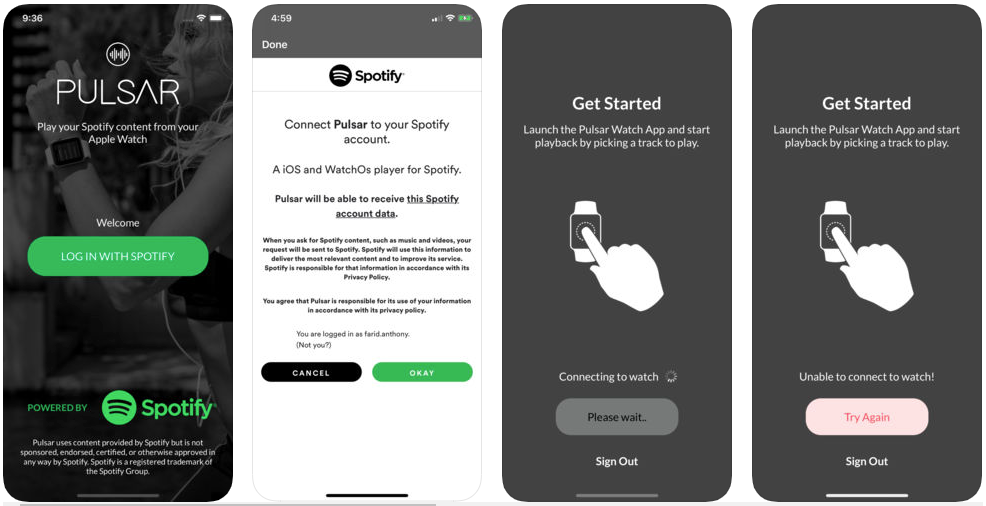 To address all your music tendencies, it coaxes you with all the powerful features such as:

If you are searching for a spectacular, sleek and smooth music player apps in UK for your Android device, Phonograph could be a valid choice.

What is special about Phonograph is its intelligent UI that dynamically adapts to the surrounding media content color to ensure your experience remains consistent and eye-catching. 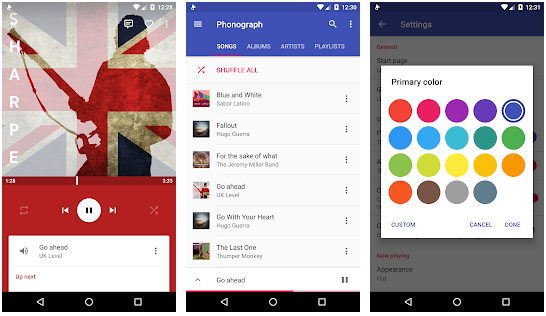 Its smooth and clean interface makes navigating through different media files a breeze for listeners.

Along with basic functions of a typical music player, the app can also automatically fetch other essential information related to songs being played, including title, album name and artist.

Like Pulsar, Phonograph users can also use tag editor for songs and albums.

The Android version is, as expected, quite elegant in look, and worthwhile as users can access over 30 million songs from Apple’s catalog.

You can also play Apple’s Beats 1, a music radio station, and explore tons of other special contents.

If you can neglect and are patient with certain small issues of Android Apple Music player, the app is amazing. It offers a free trial for three months for ad-free service.

Musicolet is the perfect music player for those who love to play local music files stored on their Android device. Easy-to-use, lean and feature-rich, Musicolet stays true to its offering and excludes supernumerary support such as cloud and streaming options.

The best for offline music functionality, Musicolet surpasses many existing default music player apps in UK and third-party apps, without costing much space on your device.

Some of its excellent features are:

Respected for its innovative, unique and user-friendly UI design, n7player is another considerable music player app on the list. The app provides you with one-click access to songs and music libraries and a ten-band equalizer to tweak and modulate songs as you wish.

There are cool presets, too, and users will also like to customize its look and revamp it. The app allows customization for lock screen, widgets and more.

Its main features are:

Not as dominant as other music player apps on the list, the PlayerPro Music Player nonetheless comes with intuitive, user-friendly interface with many options and most loved by the users in UK.

For example, users can install custom skins and DSP pack. You can also find songs and albums easily with its smart playlist and folder management.

It has two versions; its free limited version will give ad-free experience for 10 days whereas paid version frees you from ads completely.

Simplicity does not always bore as this app proves. Despite being simple, BlackPlayer is powerful enough to live up to the expectations of the most demanding music listener.

What makes it simple is its minimalist design, flat but packed with an array of theme options and font choices. Usually, BlackPlayer supports widely used file formats such as MP3, OGG, FLAC and WAV. 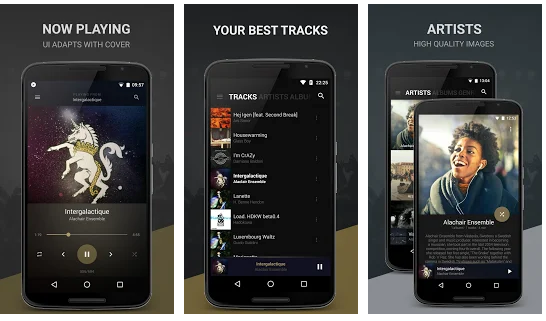 Pi Music player has all the vital features a true music fanatic would love to see in an app like this. Though it is still not the most flawless among music player apps, it has a simple and attractive interface built with a material design which makes it spectacular and eye-catching to users.

The Pi Power Share is the feature that stands out and perhaps seems to define Pi Music Player app. This feature allows you to send your personal playlist and songs to other device comfortably. Plus, you can also make your own MP3 ringtone with its ringtone cutter. 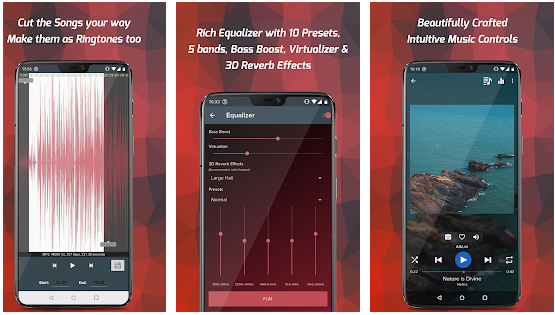 Advanced and feature-rich, Neutron Music player earns this spot by being capable of delivering a 32/64-bit audio rendering engine, a feature that provides users with a paramount audio quality.

As developers confirm, this engine is independent of the OS platform it works on. Unlike other music player apps, the distinctive HQ audio playback of the app eliminates frequency resampling and bit truncation. 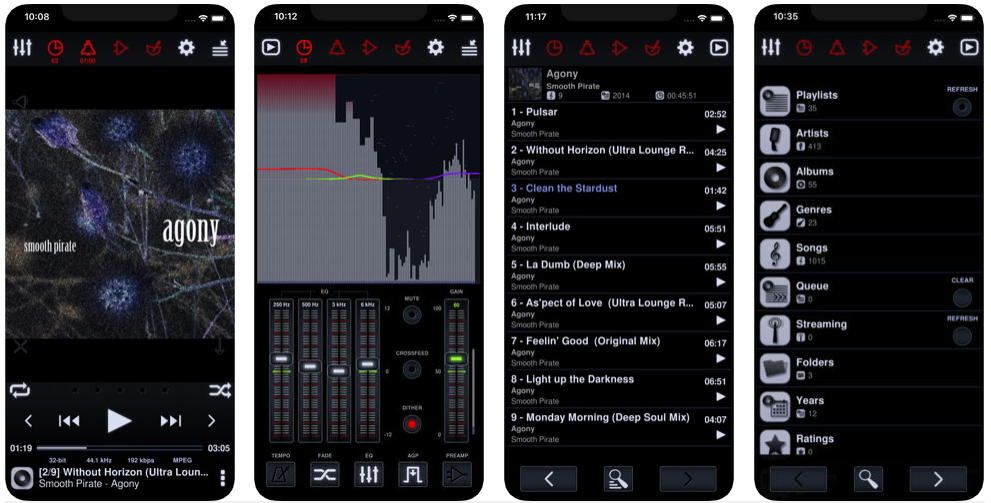 MediaMonkey is another powerful and decent music player app that you can choose to search, play and manage music playlist smoothly. Easy in its file management and navigation, the app is doubtlessly powerful with advanced features such as podcast and audiobook management and five-band equalizer.

One can easily create a queue, change the playlist and sort tracks effortlessly. The Sterral part is that it takes only a few clicks to synchronize your media collection between phone and desktop. 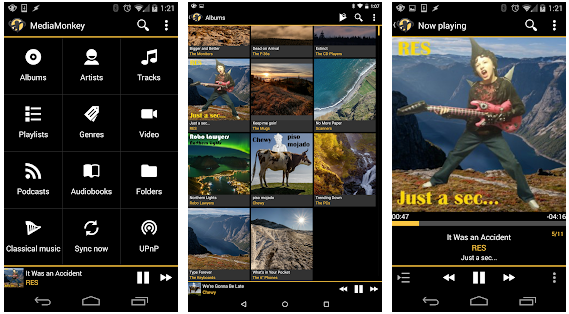 Rocket is one those Music Player apps where users can search, play and manage their tracks and playlists on their Android smartphone with ease and smoothness.

This feature-rich app has grown famous among modern music listeners especially because it supports a gamut of media file formats such as wav, ogg, m4a, alac, tta, ape, mpc and more.

Powerful, feature-rich and effective, Shuttle+ Music player is incredible music app for Android device in many ways. It is relatively new in the market but the app has blossomed in its popularity recently.

The app provides a smooth and intuitive UI which looks to Google’s standard material principle. Users are allowed to customize its appearance using its built-in theme options and widget choices. The app is free to use, which sounds pleasant to many. 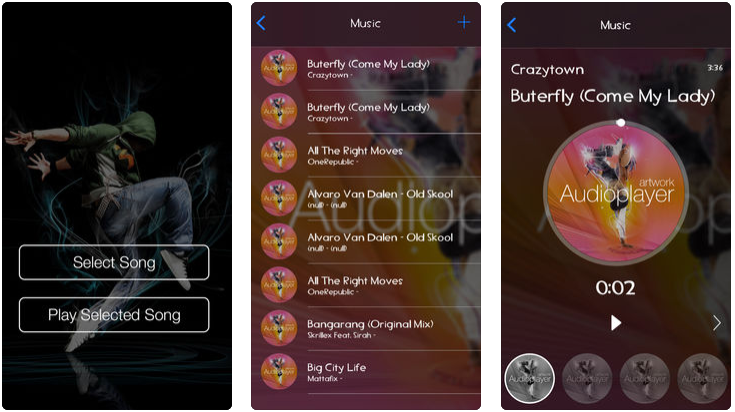 The last on the list is jetAudio which is one of the most loved music player apps. Due its simple, appealing and robust structure, one can easily become a fan of jetAudio. 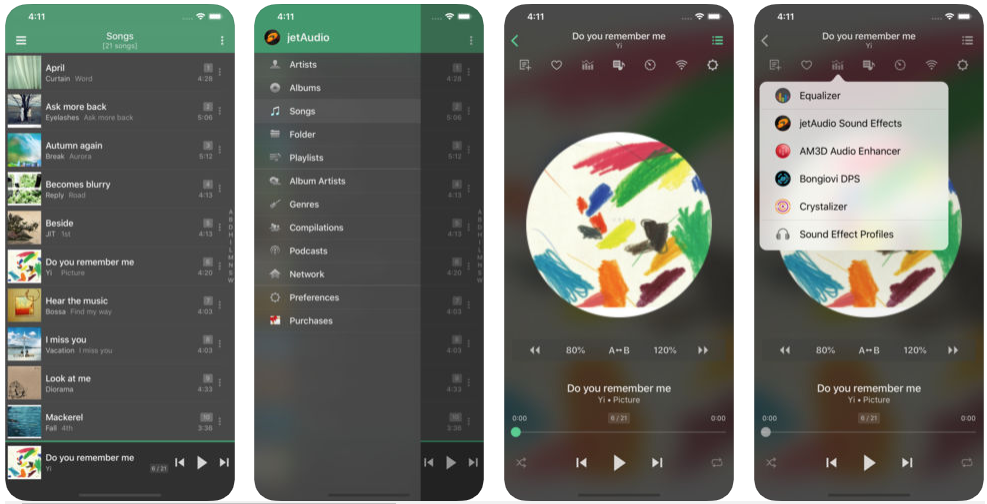 The list of 13 music player apps for Android device is enough to send you far into the world of immersive music listening experience. Each app stands out in its own league and stunning as it is built with unique mindset to keep you engaged and entertained.

You may download a couple of them from Google Play store (if you haven’t yet) based on your taste in music and realize its powerful effect.